Methods of play at roulette vary from individual to individual. We all have our favorite ways to wager at the game and that’s just fine. After all, we are wagering our hard-earned money and we can do it any way we choose. It is a way to have fun for many of us.

On the American double-zero wheel (0, 00) you can consider those zeroes to represent the north and south poles of our planet. You are going to bet each side of this polar landscape. You can decide how many chips and how much money to wager as long as you keep your wagering reasonable in terms of your total bankroll.

We are being aggressive here but we don’t want to be crazy.

At one end, you have the zero (0). That number is surrounded by 14, 2 and 28, 9. You are betting those four numbers plus the 0. That makes five numbers that favor you.

At the opposite end of the wheel, you have the double-zero (00). That is surrounded by 13, 1 and 27, 10. Betting those five numbers will now give you a total of ten favorable numbers at play in the game. Thus, you have ten chances to win and 28 chances to lose.

Can you bet more than five numbers? Yes, but that is putting a lot of money at risk. Give that a double-think before you do it.

[Please note: I am calling these numbers “polar” numbers but that doesn’t mean they are automatically cold. Whatever heat or cold exists at a roulette game has nothing to do with the actual temperature of the room. If it did, we’d all play in a sauna!]

On the single-zero European roulette wheel (0), we don’t have two distinct poles; instead let’s say we have a “monopole” to play which is, of course, that single zero.

The Red Sky at Morning Method

Sit at the head of the table, all the way down from the wheel. You will notice three columns of twelve numbers each going down the layout. The top of each column begins with these numbers: 1, 2, 3 and they go down to 34, 35, and 36.

[Please note: These proposition bets are called the “columns.” There are three of these columns, each containing 12 numbers. None has the 0 or 00. You can win two-to-one if a given column hits but those zeroes are losing bets. So, on the American game you have 12 ways to win one of these bets and 26 ways to lose it.]

The third column are the following numbers and their colors:

You will notice that there are eight red numbers and only four black numbers in this column. This is often called the “red sky” column from the phrase “red sky at morning, sailors take warning.” In literature, such an occurrence was usually not a good thing for sailors.

Now, many players like to jump on red here. They bet the column and they also bet the even-money “red” wager. The column gives them 12 chances to win at 2-to-1 and the red wager gives them 18 ways to win at 1-to-1. 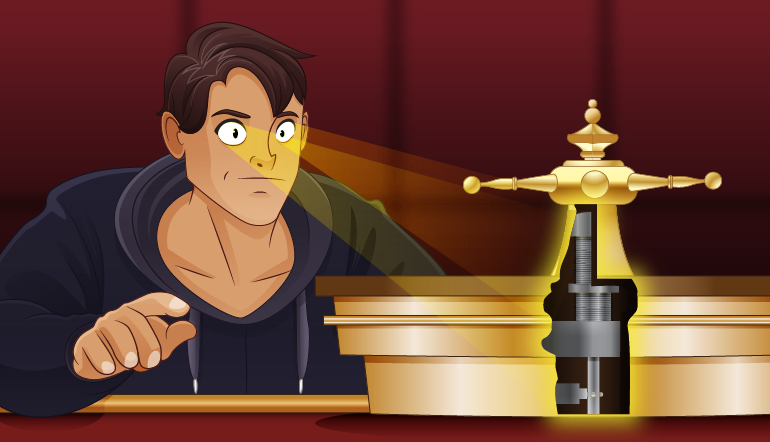 The second column is the reverse of the third one; the dominant color is black. There are eight black numbers and four red numbers in that middle column.

If you recall Wesley Snipes’ character in Passenger 57, he had a simple philosophy and that was “Always bet on black!” It seemed to work for him, at least in the movie.

The second column is therefore the “Always bet on black” column in honor of Wesley. As with the third column’s strategy with red, you can also bet the black on the even-money wager as well.

The single-zero European game is the better game as you only lose if that lone zero shows, so a win on the column is 12 and the loss is 25. The black even-money bet wins 18 and loses 19.

The very first column has an even number of red and black numbers at six of each.

If you decide to bet the first column, you are playing a seemingly even game – at least it seems that way since you will lose as many as you will win in terms of the colors in that column. However, you will still lose the number of times needed to keep that house edge at 5.26 percent on the American game and at 2.7 percent on the European game.

Yes, you can still stretch out your betting style and add an even-money bet – you choose which one! Nothing changes the house edges. Sorry. This is a sad but true reality of the great game of roulette.

Four Corners of the Earth: The World Tour

[Please note: The American double-zero wheel and the European single-zero wheel are laid out differently so techniques on one might not be applicable to the other. We therefore must take each wheel separately. To repeat, the European wheel, all things considered, is the better wheel.]

Remember that you must be ahead at the end of the world tour of the numbers so that means a minimum of two hits out of 19 numbers.

Here are the numbers:

Here we are going to split the numbers in half and dangle the zero (the monopole) at the end. You must go through the first 18 numbers and be ahead before going to the second 18 numbers. Once you finish those 18 numbers, you will bet the zero (0).

When Is It Time to Quit the World Tours?

Okay, a simple question for you: When should you quit playing the World Tour? You have to determine if you wish to continue playing once you get tired (many players do not take fatigue as a sign to take a break, I definitely do believe that fatigue is a bad thing for players), or if you lose “X” amount of money, or if you win “XX” amount of money. Placing a bet on each of the 37 or 38 numbers one-at-a-time will take time so you will get a full roulette playing experience going through the world once or a few times.

Please keep in mind that this playing method might see long streaks of losses. How could it not? You must get a hit in 37 or 38 numbers; the house wins almost all spins against you. So, you are going to take it on the chin on many occasions. But remember, one hit pays 35-to-one so you can come roaring back with just two such hits.

You must develop a slot-player mentality; get used to the losing streaks because better times are ahead. (Is this true? Maybe. Maybe not.) Most slot players seem very patient with long losing streaks in the hope a “big baby” is coming their way.

Those of you who have read my books or articles about roulette know that I favor betting the even-money bets of red/black, or high/low, or odd/even. I prefer to avoid long losing streaks even if those streaks can be broken (if not shattered) by some big hits on straight-up, inside wagers.

I just don’t have much of a taste for losses.

My play on the even-money bets is simple. I make one bet, often on the red or black, but I will occasionally make one bet on the other propositions of high/low or odd/even instead of on the red/black.

One bet. Period. That’s what my digestion can take. You can say that I am indeed not an “action player.”

Correct. Bet a red or a black, and a high or a low, and an odd or an even. You have a decent chance to win one of those bets, maybe two and maybe, yes, all three.

You can keep a running list of how you are doing and this list can be used to give you a clue as to what propositions to wager on the next decision.

[Please note: Okay, okay, you caught me. I am saying maybe some kind of trend betting system can be used here. Will this change the house edge against you? No. Will this change the nature of the game? No. So what will it do? The answer is simple: it will engage you. Actually, I think that’s why we play; we want to be engaged.]

There you have it; my aggressive plays at roulette. I think they make a certain amount of sense for players looking for the thrill of a major pursuit.