Shooting Dice at Craps: Tips, Insights and Type of Shooters

Very few players alive today had the privilege that I had; that is, knowing and learning from the legendary Captain of craps, the late, great dice player, craps expert and teacher who called Atlantic City his domain. I was lucky to know him, play with him, and learn the game of craps and casino gambling in general under his tutelage.

There are only two living members of his great “crew,” Satch and me. At the time of our early 1990’s dealings with the Captain we two were basically low rollers; in short, five-dollar bettors. The 22-member Captain’s Crew that we joined were high rollers of the really, really high sort. There were more orange chips on the table than red that is for sure. And browns! Many gamblers were intimidated by such wagering levels. I know I was.

Of course, Satch’s wife and my wife the Beautiful AP were with us every step of the way with the Captain. So that leaves four of us. It was some ride!

Satch has more or less retired from playing craps so I am the only active member still playing the game remaining, I do find that sad but life has a way of taking all of us out of itself as time swiftly passes everybody by. Craps games do not last forever. 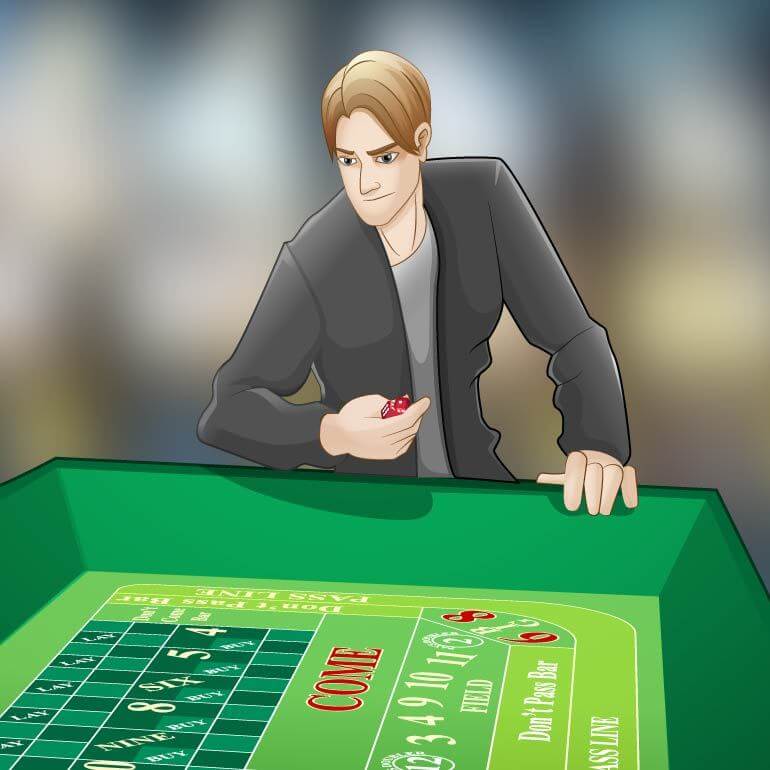 WHAT’S SO SPECIAL ABOUT SHOOTING THE DICE?

There are only two games in the casinos (one of them will also apply to a licensed online casino) where the player has the opportunity to take the bull by horns and try to beat the house. The first is the high-roller room baccarat of the big table where players actually get to deal the cards. The second is the game of craps where every player is given the opportunity to shoot the dice in order to try to bring home the money.

[Please note: In high-roller baccarat, the players get to deal the cards but all decisions are prescribed by the rules of the game. Since the game is dealt out of a shoe, the player who is dealer has no control over anything although, yes, dealing is fun.]

Most players will take their turn shooting those cubes. There are a few individuals who won’t and they will pass up their turn with the dice. If you do play craps by all means take those dice and try to make some money from your own roll. It is a unique opportunity.

Can players actually throw the dice in a way that gives them a chance to overcome the house edges at the game? Almost none can – except for a few outliers who actually have developed what the Captain called the “rhythmic rolling” ability. That hard-earned skill I will get to at the end of this article.

The Captain categorized shooters based on their proper attitude towards shooting or lack thereof. True, almost all shooters had to face the random game but how they played it meant something to him. Form and style had meaning to him.

THE “I DON’T CARE” SHOOTER

I am sure all craps players have experienced this shooter and probably most of them feel as the Captain does; these “I don’t care” shooters don’t take their shooting seriously. They just whip the dice down the layout and effect an arrogant, uncaring haughtiness thereby letting everyone betting on them know that rolling is meaningless at a game such as craps.

The “I don’t care” shooters are right too. But they are wrong as well.

Players’ money means something to those players. Certainly the game is random as life itself could be random; as the universe could be, as our individual selves could be but we give meaning to ourselves, our family, friends, jobs and our activities and all the things we think and do and one such thing many of us do is shooting the dice at craps.

The Captain said, “I want to think the person shooting the dice whether a random shooter or not; I want to see that shooter look serious; knowing players’ money is at stake in the game. That means something to me. Style is important in all aspects of craps and of life. I take the game seriously and I expect other players to take the game seriously as well. If I have money bet on them I want them to care about that.”

The “I don’t care” shooter makes the game less important than the other players think it is. He degrades their seriousness and concern. Craps is far more fun when this person is not at the game.

[Please note: A corollary to this shooter is the same type who also criticizes other shooters for taking their shooting seriously. “Come on, shoot the stinking dice, will you?” Add such admonitions from the “I don’t care” shooter and the game loses its appeal.] 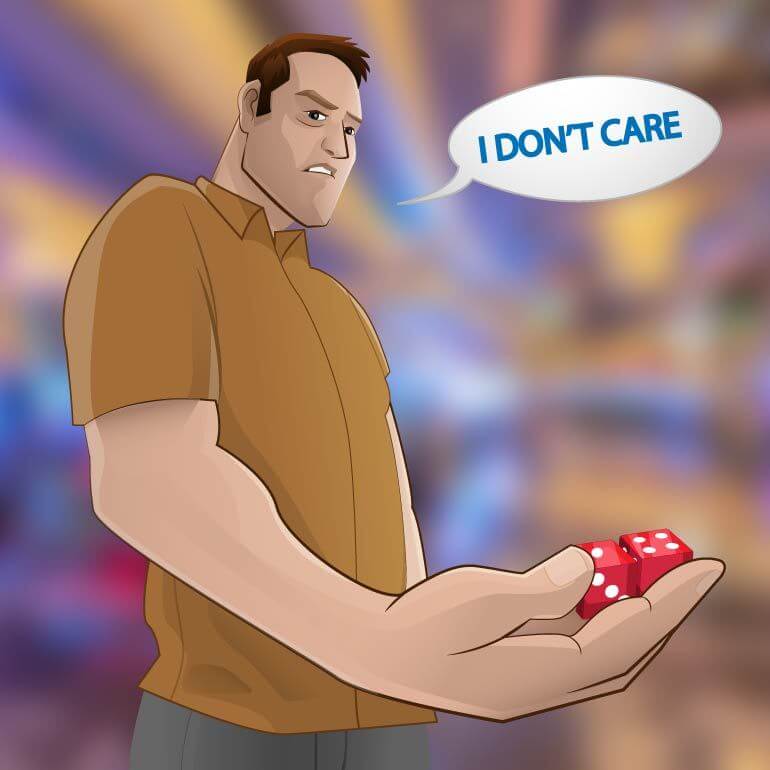 The Captain said, “How a player looks is the key to how they feel. I want the player to want to do well. That caring? Does it translate into a good roll? No, not at all, but it does tell you that you and the shooter are in this game together. Our fates are linked.”

I am seeing more and more careful shooters in the past 20 years; that is, shooters who take care with fixing their dice on certain pips and taking great care with their rolls. You just know they want to do well and they are sincerely (somewhat) sure that if they can just get those dice to do what they want everyone at the table will make some good money. They believe that in some way their rolls will be good.

The Captain said, “When I go to a gourmet restaurant I want to dress up. I like seeing men and women looking their best. It adds to the dining experience. The shooters who fix the dice in certain ways and take some time with their throws give me a charge. I am so rooting for them to do well, not just so I can win money, but so they feel a sense of accomplishment. If you meet a shooter such as this who did have a good roll; you meet him in a restaurant or the cashier, you thank them. They feel great when you do that. They cared.”

[Please note: “Fixing the dice” is the same as “setting the dice.” It is making sure certain pips on the dice are aligned the way as you want them to be.] 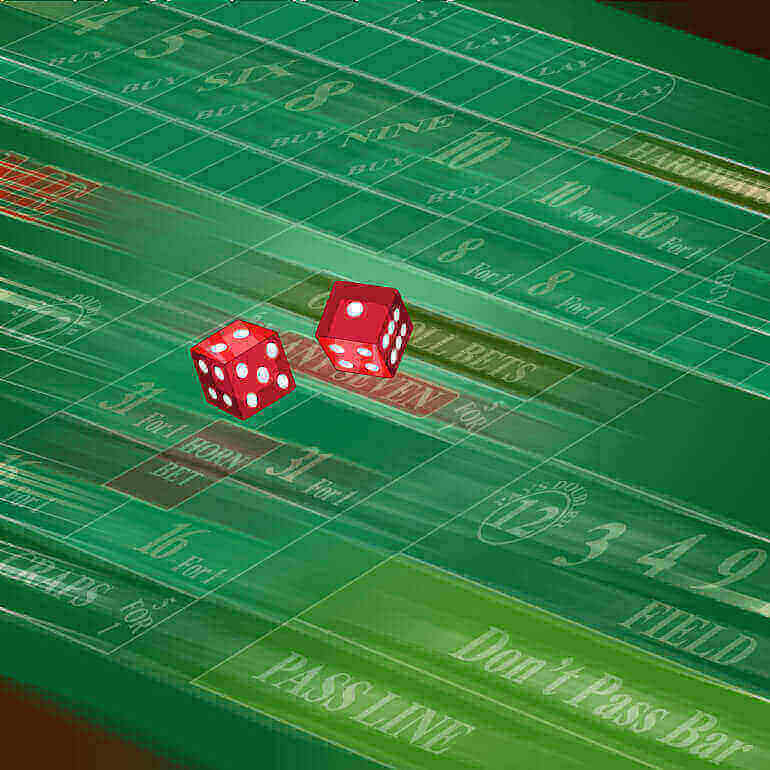 It wasn’t too hard for him to believe in such since he was himself a rhythmic roller. Indeed, the greatest rhythmic roller I ever saw was the woman called “the Arm” who was truly an amazing sight to behold. She was the shooting glue that held the Captain and the Crew (and me!) in her grip. I have never seen a shooter since her that can match her.

For years I taught a course in rhythmic rolling but I found that most students just couldn’t do what was necessary to achieve this ability. It was not any physical limitations, it was discipline coupled with the ability to completely change one’s perception of the game.

My estimation was that for most novice rhythmic rollers it would take at least six months of practice to become somewhat proficient. A huge segment of the students did not want to wait that long and headed right to the casinos to try out what they had just learned. That would be like taking a first week little-league ballplayer and having him play in the major leagues. Success would not happen except through luck. In short, these craps players would be random shooters who fancied themselves rhythmic rollers. Sadly some teachers would egg these poor souls on to hop to the casinos and jointly play together at the same tables.

The next problem was huge. Most of the players could not rid themselves of their poor betting choices. Even those players who actually achieved some mastery of a rhythmic roll just couldn’t stop wagering on propositions that they had no ability to beat. They made the worst bets and then bragged if luck was in their corner on any given session. This luck they mistook for skill but they paid the price for such foolishness.

Many teachers of rhythmic rolling do not have the actual skill but pretend they do. They can be dangerous individuals with which to throw one’s lot. You will learn poor betting methods and a host of supposedly legitimate throws which are not really legitimate at all. So that is one big caveat to achieving a real skill.

[Please note: Rhythmic rolling was coined by the Captain but since his time other words or phrases have also been used to describe this skill such as precision shooting, dice control, dice influence and rhythm rolling. These are all synonyms.]

ELEMENTS OF THE RHYTHMIC ROLL

There essentially 10 elements to the rhythmic roll.

Listen to the Captain. His words and his ideas have revolutionized much of craps play – at least to those of us who listen to him. How you shoot the dice is a reflection of your character. Be serious about it even if you are playing the random game with your actual shot.

I have written several books about him and I have based my writing on his ideas. Following a player such as the Captain is a smart move.

The Captain has stood me in good stead for three decades.