Crapless Craps: All You Need to Know as a Craps Player

What is Crapless Craps? Among possible comeout rolls, only four are losers for pass bettors in craps: the one way to make 2, the one way to make 12 and the two ways to make 3. What if there were no losing numbers on the comeout? What if the craps numbers were point numbers? Then you could win on the comeout, but you couldn’t lose. That’s the way it works in Crapless Craps, sometimes called Never Ever Craps.

There are ups and downs that go with adjusting the basic rules of craps in a game that was first played at Bob Stupak’s Vegas World casino in Las Vegas. It’s become an option that pops up from time to time both online and offline.

Along with 2, 3 and 12, 11 is a point number in Crapless Craps. In standard craps, the two ways to roll 11 are winners on the comeout.

Six winners and no losers compared to eight winners and four losers looks like a good tradeoff for pass bettors, but there is a drawback.

Overall, the house edge on the pass line in Crapless Craps is 5.38 percent, nearly four times the 1.41 percent edge in standard craps.

The key is that the craps numbers 2, 3 and 12 are difficult to make as point numbers. Craps shooters in Crapless Craps make their point less often, and that drives up the house edge.

In Crapless Craps, when the shooter rolls anything except a 7 on the comeout, that number becomes the point.

In order for the pass bettor to win, the shooter then must roll the point number again before rolling a 7. If a 7 comes first, pass bets lose.

Pass bettors always are the underdogs once a point is established because at that point 7 is a loser, and 7 is the most frequently rolled number.

The best points for craps players are 6 and 8, with five ways to make either number. If the point is 6, there are five rolls that will win, while the six 7s will lose.

But when 3 or 11 is a point number, there are only two possible winning rolls vs. six possible losers. And with 2 or 12, there’s only one craps winner and six losers.

With such difficult to roll numbers becoming points, pass bets lose a greater percentage of the time than they do with 2, 3, 11 and 12 rolls that don’t matter after the comeout, as in standard craps.

Come bets work just like pass bets, except they’re made on rolls other than the comeout.

If there already is a point working on pass, then you can get another point working by betting on come. The next roll serves as a comeout for come bets. You win if the roll is 7, and if it’s any other number, it becomes the come point.

To win, the shooter must repeat the come point before rolling a 7. If the 7 rolls first, your come bet loses.

Just as in standard craps, pass or come bettors may back their bets with free odds wagers, and winners are paid at true odds. 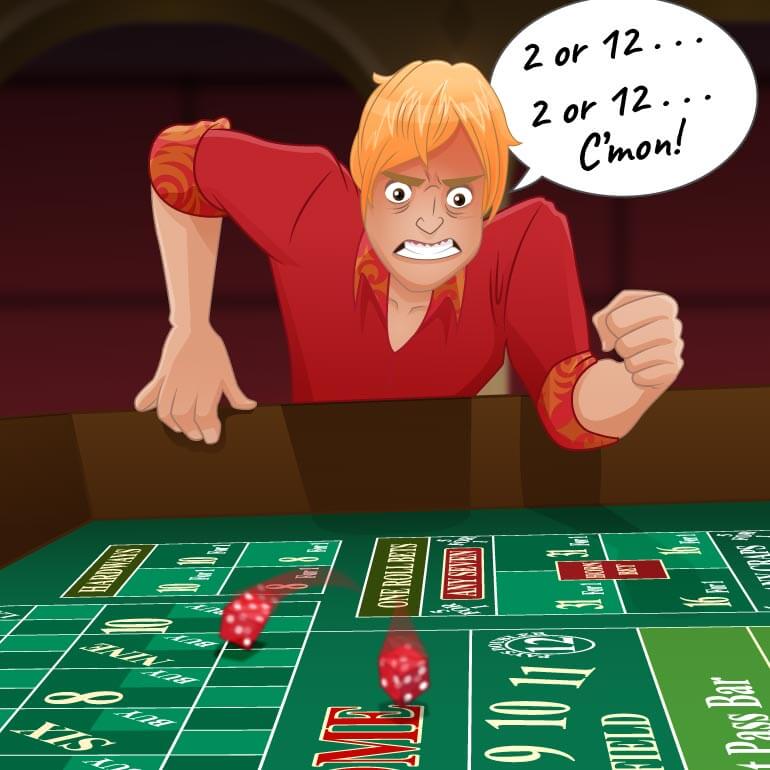 That helps bring the higher house edge on Crapless pass and come into reasonable territory.

If you back your pass or come bets with an equal free odds bet, the house edge on the combination is 2.94 percent.

Different casinos allow you to back your bets with different odds multiples. If your odds wager is twice the size of your pass or come bet  — 2x odds – the house edge drops to 2.02 percent. At 5x odds, it’s 1.04 percent.

It’s unusual to see more than 5x odds permitted at Crapless Craps, meaning the house edge nearly always is in excess of 1 percent. Contrast that to standard craps, where pass or come plus 1x odds lowers the edge to 0.8 percent.

In Crapless Craps, place bets work just like they do in standard craps, except that you also may place 2, 3, 11 or 12.

On a place bet, you put chips in front of you and tell the dealer you want to place a specific number. Then the shooter must roll your number before rolling 7.

If you place 6, for example, you win if the shooter rolls a 6 and lose if he rolls a 7. No other numbers count. If there’s a sequence of rolls such as 11, 5, 9, 8 and 4, your bet either stays in action or you may take it down. None of those rolls decide your bet.

Winning place bets pay less than true odds but more than even money.

In standard craps, the better play is to bet pass or come, even without odds, than placing 6 or 8. In Crapless Craps, it’s the opposite. Placing 6 and 8 are prime ways to play.

You have to adjust to the conditions of the game, and while 2, 3 and 12 are no longer comeout losers, they’re not favorable numbers to bet, either.