What is Free Bet Blackjack?

Free Bet Blackjack is a variation of the traditional game of blackjack. The “twist” in this game is this: the casino will pay the player to split and double down in certain hands.

The game is offered in many land-based and online casinos. Most casinos use six decks although it is available in single-, double-, and eight-deck games. Rules can vary (more shortly) but the most popular version is a six-deck game with these rules:

What separates Free Bet Blackjack from a traditional blackjack game is this:

When you are dealt a hard  9, 10, or 11 and you want to double down, you indicate this to the dealer. Instead of your making the additional wager for the double down, the dealer will place a plastic, free bet lamer as your secondary wager. (Essentially, the casino makes the bet for you.) If you win the hand, your original wager will win even money and she will take the lammer and replace it with a real casino chip that is equal in value to the original wager.

Here’s an example of how this works.

Suppose you wager $10 and are dealt a hard 11. You want to double down so you indicate this to the dealer. She will place a lammer next to your original $10 wager.

Free doubles are not in effect for any hand that contains an ace (i.e., any soft hand). You can still double down on a soft hand, but you do not get the free double.

In addition to the Free Doubles, there are also Free Splits where the casino will pay for the secondary bet on splits, meaning the dealer will place a Free Bet lammer on the second hand of a split.

Suppose you wager $10 and are dealt a pair of 8s. You indicate to the dealer that you want to split. She will separate your pair of 8s into two hands, each starting with a count of 8. Your original $10 wager stays with your first split hand, and the dealer will place the free bet lammer on the second hand. You must play each hand one at a time.

Free Splits are available on all pairs except ten-value cards. In addition, if your split results in a soft hand and you want to double, you can’t ask for a free double (but you can double down with real casino chips).

5.0 The Effect of Free Double and Splits

If just free doubles and free splits were allowed in a traditional six-deck blackjack game, according to Geoff Hall,  the inventor of Free Bet Blackjack, the player would have about a 6% advantage. Since the casinos could not offer a game with this much advantage to the player, there is an important “catch” to Free Bet Blackjack (see next section).

A secondary characteristic of this game is its volatility is less than a traditional game (because of the free bets and splits where only half of your money is at risk); therefore, your bankroll will last longer. (See also Section 9.0.)

To compensate for the Free Doubles and Splits, there is a “Push 22” rule, which is this:

Bottom Line:  No matter how good your hand happens to be (even if it’s a 21), if the dealer busts with a total of exactly 22, the hand is a push.

The most important playing strategy for Free Bet Blackjack is this:

There is a published basic playing strategy for Free Bet Blackjack. If you want to play this game, I strongly encourage you to study and use this strategy. You will find it on wizardofodds.com. 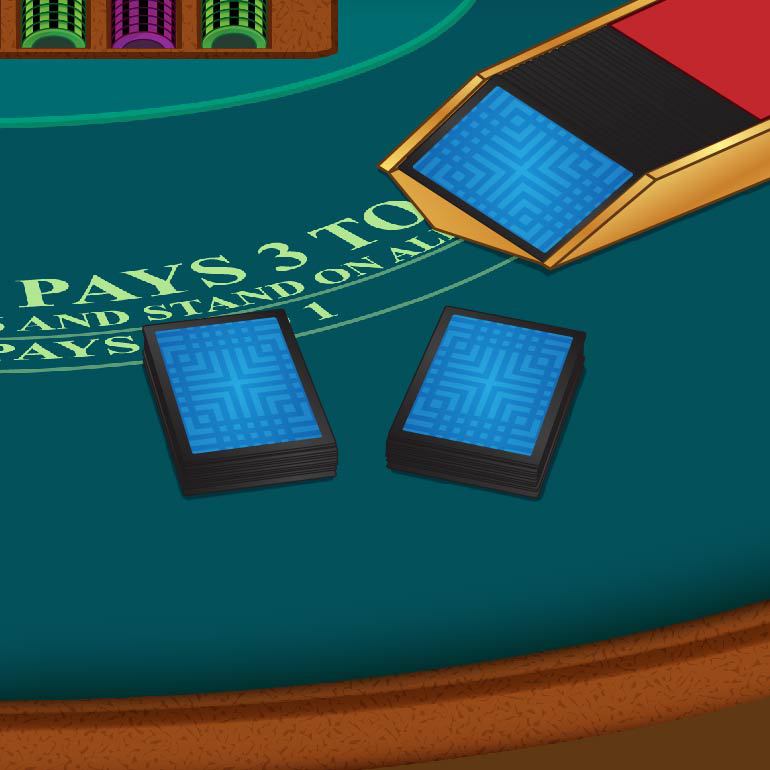 (Note: Unlike a traditional game of blackjack, the house edge increases when fewer than six decks are used. Thus, given a choice of playing a Free Bet Blackjack game with a single deck of cards vs. six decks, the latter is the better choice. You will find the effect of different playing rules on the house edge on www.wizardofodds.com.)

With a mix of favorable playing rules, you can get an edge by card counting. (Assuming the cards are not reshuffled after every round, and the player is using the basic playing strategy for this game.) Blackjack Hall of Famer Don Schlesinger, author of Blackjack Attack: Playing the Pros’ Way, brought up this important point. “If the variance is less for this game, it means for the same bankroll, the card counter can bet more at all levels, since the calculation of optimal wager involves dividing by the variance. If the variance is lower, the fraction is higher. This would make the game worth playing, for sure.”