Given average results in every casino game, the house will make money. Blackjack rules set up an edge for the house in a way that’s not always obvious to new players.

The house has only one edge: players act first and lose if they bust regardless of the outcome of the dealer’s hand.

Regardless of whether you’re playing in an online casino or at a live table, if you bust, the hand stops for you and the dealer takes your chips. Play goes on for others at the table. If someone gets a hand to stand on, the dealer’s hand matters for them.

This article takes a look at the overall house edge in Blackjack and how it works.

Dealers are required to hit any hand of 16 or less and stand on any hand of 17 or more. In some games, dealers also hit soft 17 while standing on hard 17.

There are small differences in bust percentage depending on whether the dealer hits or stands on soft 17, but dealers bust approximately 28% of hands.

New players sometimes are fooled into thinking dealer strategy is the best strategy. So they mimic the dealer in making hit or stand decisions.

When players mimic the dealer, they also bust 28% of the time.

There’s overlap when both player and dealer bust, and on those overlapping hands, the house wins.

On average, both player and dealer bust 8% of the time. If players were restricted to the same hit/stand rules as dealers, the house would have a whopping 8% edge in a single-deck game, and a few tenths of a percent more with more decks.

Average results don’t happen every time. Players win often enough to make the game fun and exciting and to keep us coming back.

At a table with an 8% edge, we’d find our money disappearing fast enough and often enough that most players wouldn’t bother. They’d leave for other games.

Casinos don’t want to chase you away. So a set of compensating rules and conditions was developed to give some of that edge back.

There are four basics that are part of nearly every blackjack game: 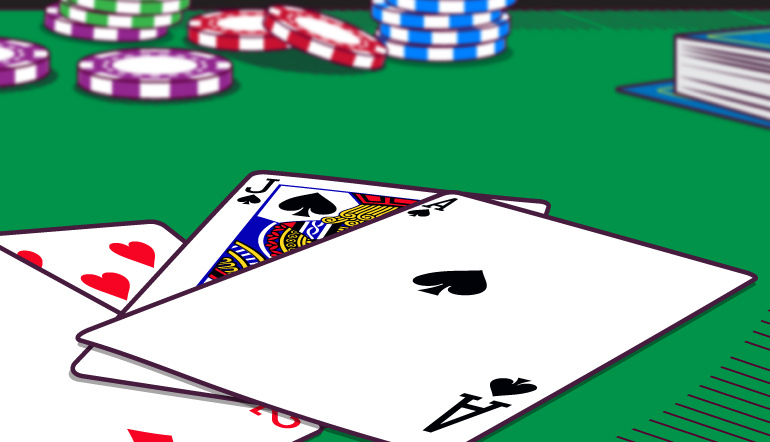 There are many other optional rules that can move the house edge up or down by a few tenths or hundredths of a percent, but these four are the basics. They reduce the house edge from 8 percent to less than 1% – about half a percent with six decks

if the dealer stands on all 17s, or about 0.7% if the dealer hits soft 17. Here’s an overview of what each of those basic givebacks does to the house edge:

That’s the case in most games. Beware of games that pay only 6-5 on blackjacks. That reduces that starting house edge by only 0.9%.

It’s usually said that 6-5 payoffs on blackjack add 1.4% to the house edge. That’s true relative to a game where blackjacks pay 3-2. But the house collects no such bonus pay when you lose, so relative o a starting point of a no-bonus set of rules, the small extra payoff in a 6-5 game reduces the original edge by 0.9%.

When to hit, stand, and more

Imagine a world in which you had to hit when you had 9-7 for a hard 16 and the dealer had a 6 face up. Using dealer strategy, your average loss would be 43.7 cents per dollar wagered. But you can stand instead, and that drops your average loss to 12.5 cents.

There are dozens of hands in which the strategy that works best for players is different than the strategy required for the dealer. Gains, large and small, add up to cut a big hunk off the house edge.

That opportunity to double down reduces the house edge by about 1.6 percent.

Basic strategy charts recommend doubling down only when you have an edge with a one-card draw, so doubling your bet increases winnings. If you don’t have an edge, you don’t double.

One great double-down situation comes when you have 6-5 and the dealer has a 5 up. In an average six-deck game, you could just hit and earn a profit of 32 cents. If you double, your profit increases to 64.1 cents.

You won’t always win even though you have an edge on the hand. Sometimes you’ll lose two bets instead of one. But average results work in your favor and help knock down the house edge.

Imagine you have 8-8 and the dealer has a 7 up. If you had to play it like the dealer and split, you’d lose an average of 40.8 cents per dollar wagered.

But if you split, the average result is a profit of 31.8 cents per dollar of your original wager. You’ve turned a losing hand into a winner by exercising an option the dealer doesn’t have.
Sometimes splitting reduces losses instead of increasing wins. That’s good for players, too. The result is that being allowed to split pairs reduces the house edge by 0.4 percent.

Add all that up, and that 8% house edge is all the way down to 0.2% – about right in a single-deck game with no exotic rules, while a six-deck game would be closer to 0.6%.

The exact edge is dependent on a host of  optional rules variations.

But the big four are: blackjack payoffs, hit/stand decisions, doubling down and splitting pairs. Those diversions from dealer strategy are what make the game playable.