Chips are an essential part of any live poker game. While some recreational players will use things like dimes or monopoly money, any semi-serious home game and every game in a casino consists of two main elements: cards and poker chips.

Whether you play in a cash game or a tournament, the overall goal is usually the same – pile on as many chips as you can by winning hands. But what happens when the pile becomes too big?

In tournaments especially, it’ll often happen that someone has heaps of chips in front of them, but a majority of their stack may consist of small denominations.

This is where the colorup poker process comes into play. This routine exists to reduce the clutter at the table and ensure the game runs smoothly.

While some players aren’t big fans of it (as they enjoy endless piles of chips to revel in), color-up in poker is an essential part of almost every tournament and it’s sometimes used in cash games as well.

What Is Colorup in Poker?

In the simplest of terms, the color-up poker process is where the dealer or the casino floor will take small denomination chips and exchange them for the bigger value ones.

The reason why this is often used in tournaments is that poker tournaments feature a progressive blind structure. This means that after some time, the smallest chips become redundant and no longer have a purpose.

Let’s look at a very simple example to explain why colorup in poker exists and how it works.

A tournament starts with all players having 10,000 in their stack and with blinds being 25/50. At this point, players clearly need 25 denomination chips for the blinds. 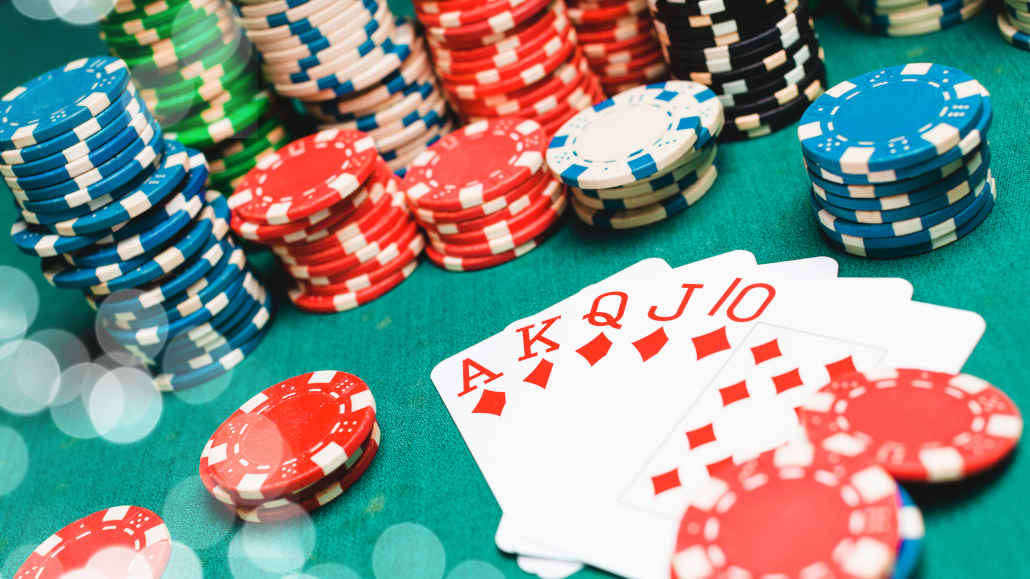 What will usually happen is that there will be a short break just before the start of the 100 / 200 level, during which the casino staff will perform the colorup poker routine.

They will take all the 25 chips you have in your stack, count them up, and exchange them for higher denomination chips.

Either way, the total value of your stack will not change. You’ll just have fewer physical chips in front of you.

What Happens With Odd Chips During Colorup?

Every now and again, it will happen that you have an odd number of small denomination chips in your stack. Instead of 40, you might have 33 or 39.

Obviously, you’ll receive the full value up to the maximum possible amount, but what happens with odd chips?

House rules may vary here, but the most common practice and the one prescribed by the TDA (Tournament Directors Association) rules is the so-called “chip race.”

During this stage of the color-up poker procedure, all odd chips are placed in front of the players who own them.

Then, players are dealt cards from the deck based on the number of chips they have in front of them (between one and three). For example:

All cards are dealt face-up, and the player receiving the highest value card wins the race. Cards are ranked using the same rules applied to determining the dealer button: Aces are high, deuces are low, and cards are ranked alphabetically from clubs (lowest) to spades (highest).

The dealer then collects all the chips, exchanges them for the higher denomination ones, and hands them over to the winning player. In this scenario, there are six 25 chips, which equates to 150. The player will usually receive two 100 chips.

Is Color-up in Poker Really Necessary?

As I’ve mentioned earlier, some players aren’t too keen on the color-up poker process. They prefer to have a bunch of chips in front of them for various reasons.

And, while I can understand the sentiment to some extent, the poker colorup procedure is quite necessary, especially in bigger tournaments. 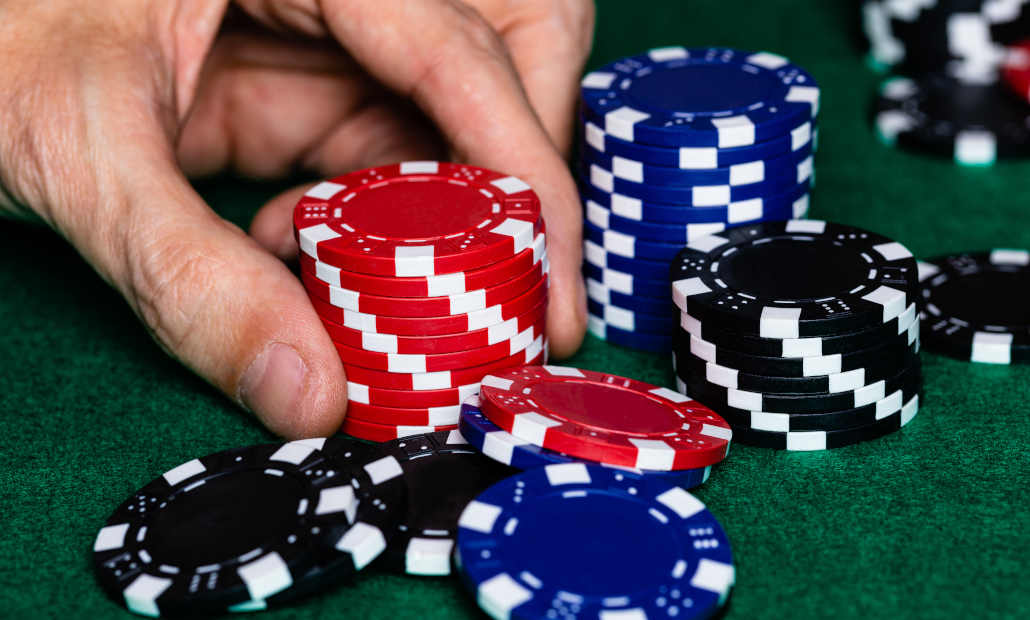 So, at some point, there’d be a situation where someone has like 200 stacks of 100 chips alone in front of them.

This is impractical for many reasons.

The first and the most obvious one is the space. If smaller denomination chips were never removed, there simply wouldn’t be enough space on the table for everyone to stack their chips.

Even if you were to build chip towers 80 or 100 chips high (which is harder than it sounds), there is just not enough felt area.

Secondly, how would you ever tell how much your opponent has in front of them? With heaps of small denomination chips all over the shot, it’d be hard, if not impossible, to get a correct estimate by glancing over at their stack.

So, colorup in poker exists to ensure a smooth game and avoid unnecessary delays and confusion.

You may have been a part of some home games that don’t do colorups, and that’s fine when there aren’t many players, but in larger tournaments, it just doesn’t work.

Which is to say, you shouldn’t get mad at the dealers and the tournament director the next time they exchange your gorgeous wall of 25 chips for just a few higher-value betting disks.

Keep doing your thing and make it your goal to do the same thing with these new chips as well. That ought to show them!

Unlike tournaments, which have pretty strict rules, Texas Hold’em cash games are usually much more relaxed. This is especially true when it comes to your chips, as these have actual monetary value and belong to you.

It’s very rare to have a mandatory color-up in cash games. In fact, I don’t think I’ve ever seen it done.

Of course, it sometimes happens that one player will have a majority of smaller denomination chips in front of them. In these situations, the dealer will color them up occasionally by taking some of the smaller chips and exchanging them for a bigger one. 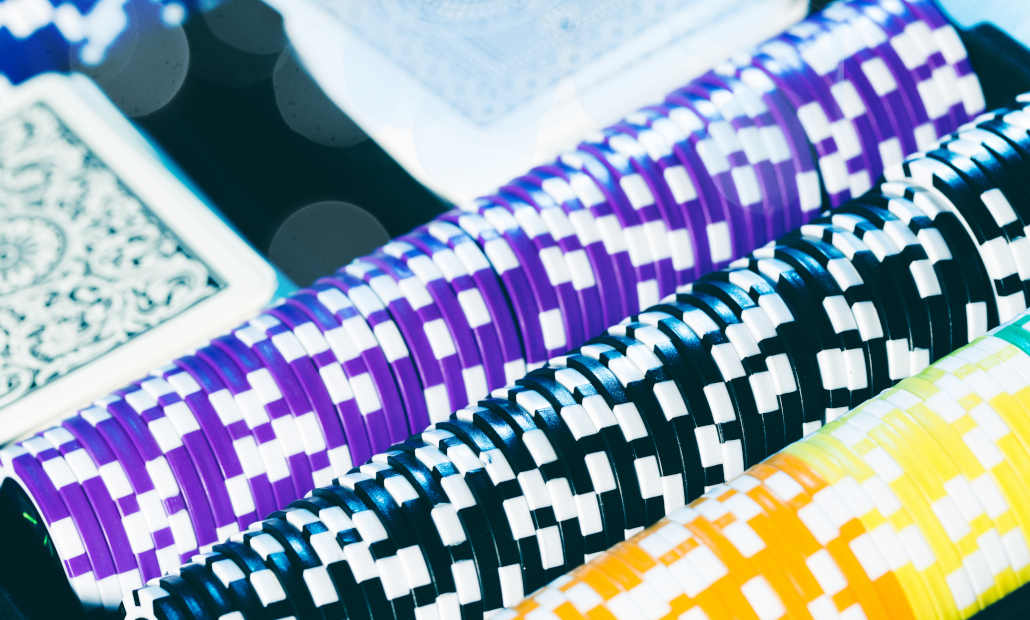 Sometimes players will do it themselves as well, especially when someone gets felted and needs to rebuy.

A player with many smaller denomination chips will often color up, taking one $100 chip from the other player and giving them 20 $5 chips or 10 $5 chips and two $25 chips.

But, in most cash games, coloring up isn’t mandatory, and if you enjoy sitting with a huge pile of $5 chips in front of you, that’s your prerogative.

All you are required to do is make sure your big denomination chips are placed so that they’re not hidden behind the smaller ones.

Players in cash games don’t often ask dealers to color them up. The only exception is when they’re about to cash out.

At that point, it makes sense to exchange your small chips for bigger ones as it’s much easier to carry 10 $100 chips than 200 $5 chips.

That said, you’re also free to take two full racks of reds over to the cashier and get paid that way.

No one will stop you, and in most casinos, no one will really care. After all, it’s your money, so you can do with it as you like.

Final Tips on Colorup in Poker

This article teaches you pretty much everything you need to know about the colorup poker process and the reasons for its existence.

Hopefully, you now understand why this procedure is there and how it helps speed up the game.

To conclude, I’ll give you a few quick poker colorup tips that you might find useful for your home games or in your local tournaments:

5 Casino And Poker Cheating Scandals That Shocked The World