In a previous article, I described my royal flush drought that occurred in 2017 and another in 2019. I ended the latter drought when I hit a royal flush in December of 2020. In fact, I hit two royal flushes so I was optimistic that this trend would continue in 2021 and I’d avoid another drought. However, this did not occur.

What I’m about to share with you as a teaching experience is what happened to me in 2021 while playing video poker. Because of the pandemic and other personal issues, I didn’t play as much video poker as I had in the past. Using the records I keep in my gambling log, I calculated that during 2021 I played 120,000 hands up to the first week of December. That included some 20 playing sessions over nearly 12 months without a single royal flush. (Ouch!)

Not a Common Occurrence

Most video poker players know (or should know) that a royal flush occurs once in about every 40,000 hands, on average (varies slightly by the game). What most players don’t know (or understand) is that the one in 40,000 is an average of many royal flush cycles. (One “cycle” is defined as 40,000 hands.)

It’s possible, therefore, to hit more than one royal flush after playing 40,000 hands, or perhaps none at all. (To view the probability of hitting one, two, three, or no royal flushes per cycle, see the table in one of my previous articles.)

The probability of playing 120,000 consecutive hands without getting a royal flush is only 5% (from the table in the book Video Poker Optimum Play, page 173). Even though the probability is low that this could happen, unfortunately for me, it did.

You would have expected that my playing bankroll would have taken a big hit in 2021, or perhaps that I even would have gone broke. However, neither of these occurred. How could this be? Keep reading for the answer.

One of the ways that you can minimize the financial hit to your bankroll during a royal flush drought is to take advantage of casino promotions that increase your free play. Instead of getting a one-time multiplier of the points you earn while playing during these promotions, your points will be multiplied by 2, 3, or a higher multiplier.

The more points you earn playing, the more free play you will have in your account. By playing this additional, free play once through the video poker machine, then cashing out the credits and adding this money to your gambling bankroll, you can minimize your losses from playing.

A second way to replenish your gambling bankroll is to take advantage of bounce back. This is free play that a casino will send to you in their monthly mailers. Usually, a casino will give you a specific amount per month that is available in weekly buckets as a reward for your loyalty.

For example, your mailer might state that during the following month you will get a total of $400 in free play in your account that you can download in increments of $100 in free play to your video poker machine each week. The latter usually has a specific start and end date for each $100 download. For example, your mailer might say something like this:

This free play that you get in your mailer is called “bounce back” because you have to bounce back, or return, to the casino at a future date to redeem the free play.

The amount of bounce-back free play depends on what your average daily theoretical (or ADT) is over the previous one- to three-month period. The latter varies by casino. (Note: Several other factors are also used by casinos to determine the amount of your bounce back. For more information on this, read my article on, “The Importance of Bounce Back for Video Poker Players.”)

During my 2021 video poker drought, I took full advantage of cashback and bounce back. I played mostly 8/5 Bonus Poker only when I was able to earn either a two- or three-times multiplier of my session points. Instead of getting the base cashback rate of 0.25% times my coin-in, I was getting either 0.50% or 0.75%. Bottom line: I was getting a lot more free play. 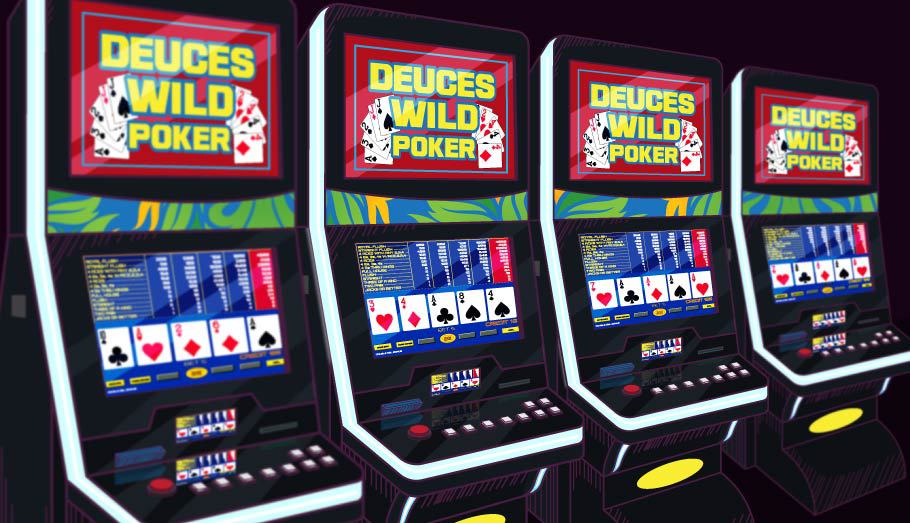 I was also able to optimize the amount of my bounce back so that I was receiving either $250 or $300 per week in free play in my mailers plus another $40 bonus in free play after earning a specific number of session points. After I finished playing a session, I would first download my free play from my multiplied points once through the same 8/5 Bonus Poker game and then cash out.

Then I’d do the same thing with the $250 or $300 in bounce-back free play and cash it out. Even though I was in a royal flush drought, and the losses from playing were steadily mounting, at no time at the end of each month in 2021 did my gambling bankroll (with the added cashback and bounce back) go negative.

The reason: the amount I was earning from the cashback and bounce back free play negated the losses from playing each month, which kept me slightly positive monetarily throughout the year.

One of the reasons why your gambling bankroll will head south during a royal flush drought (without the extra free play) is that the royal flush accounts for roughly 2% of your expected return from the game itself. (This varies slightly depending upon which game you are playing.)

The expected return for 8/5 Bonus Poker (that is played accurately) is 99.17%. When you don’t get a royal flush, your expected return drops to about 97%, resulting in a 3% house edge, which will slowly, but surely, deplete your bankroll over time until you hit the next royal flush.

Drought Comes to an End

Fortunately, my drought ended the first week in December when I finally hit my first royal flush of 2021. I was dealt this hand.

There are three possible holds for this hand.

This brings me to another key point regarding royal flush droughts. It’s important when you play video poker that you make the right playing decision on every hand. Of the three possible holds above, the one with the highest Expected Return is to hold the three-card royal flush and draw two cards.

If you opted instead to hold the low pair, or the four cards to the flush, during a royal flush drought you would have eliminated the possibility of getting a royal flush and ending your drought.

I held the three-card royal flush, and fortunately, the two cards I needed for the royal, the K♣ and Q♣) appeared on my screen. See photo below, which was taken after the attendant paid me and reset the machine. I had preloaded the machine with $500 before I began playing and was down $400 when I hit the royal flush. 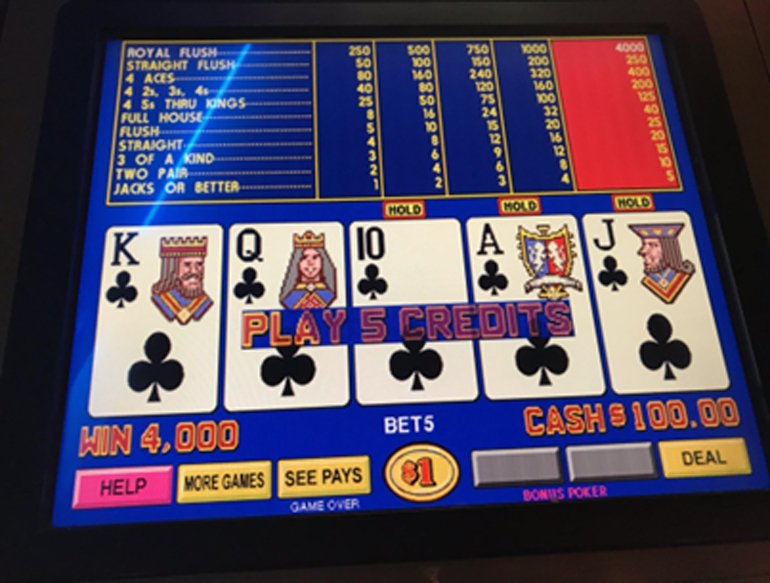 The last point is this: never say never when you play video poker. I can say this based on my above experience because:

One-tenth of one percent odds of hitting a royal are pretty long but as I say:

Low Variance or High Variance Video Poker – Which is Your Style?